SMA’S shows not only feature on corporate stages across the globe but also are making an impact in the concert arenas throughout Australia. The Rat Pack’s Back, String Diva and Boys in the Band can be seen performing regularly in full concert length shows at Theatres, Festivals, Casinos and Open Air Concerts.

All Australian Boys in the Band Tour 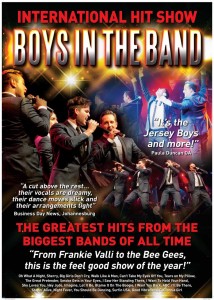 Now in it’s third year, international hit show ‘Boys in the Band’ celebrates the world’s greatest hits from the most iconic bands of the 20th century!

Billed as “the feel good show as the year” the high energy concert celebrates Frankie Valli & The Fours Seasons, The Beatles, Jackson 5, Righteous Brothers, Simon & Garfunkel and the Backstreet Boys to name just a few, and featuring 50 years of classic tunes such as: Walk Like a Man, Sherry, Can’t Buy Me Love, Let it Be, Hey Jude, Imagine, Blame it on the Boogie, ABC, Unchained Melody, Bridge Over Troubled Water, Surfin’ USA, Good Vibrations, Staying Alive and medleys of the biggest hits the world has ever known.

Since launching in 2011, this all singing, all dancing, all Australian cast have enchanted audiences right across Australia, Singapore, China, Papua New Guinea, and in 2013, travelled to South Africa where they performed a two week concert tour at the prestigious Mandela Theatre with critics labelling them “a cut above the rest”. With a unique combination of masculine charm, boyish good looks, amazing harmonies and slick moves, the boys are proud to return home for their first Australian tour and guarantee to have you up and out of your seats in no time!

SMA Productions are proud to announce the first public concert for hit show The Diamonds.

Fast becoming the most booked show in Australia, performing for high profile events around the world, The Diamonds are delighted to bring their show to the public stage marking the beginnings of what is sure to be an amazing journey around some of the most loved concert venues and festivals around the nation.

Celebrating the most iconic songs from the greatest female performers of all time we guarantee you will not be able to remain in your seats, and instead will be dancing to tunes from Aretha Franklin, Diana Ross, The Supremes, Destiny’s CHild, Lady Gaga, Beyonce and more.

We look forward to seeing you all at the show!

Tickets can be purchased from www.thejuniors.com.au

Boys In The Band are pleased to announce that they will be embarking upon their first international concert season this October at The Mandela at Joburg Theatre in South Africa.

Appearing from the 1st -13th October 2013 the boys will perform fourteen shows over the two week season.

The Mandela at Joburg Theatre has hosted many hit shows, including the West End and Broadway musicals WE WILL ROCK YOU, CHICAGO, THOROUGHLY MODERN MILLIE and FOOTLOOSE and top-of-the-line global touring shows, such as LE GRAND CIRQUE, LORD OF THE DANCE and SPIRIT OF THE DANCE.

Cast members Simon Brook McLachlan, Leigh Sleightholme, Nana Matapule and Tom Sharrah are extremely excited about the upcoming journey and look forward to bringing the show to new audiences continuing to build on the strong reputation and profile of the show internationally.

Tickets for the South African Tour can be purchased from www.joburgtheatre.com

Upon returning from a two week concert season at The Mandela at Joburg Theatre, South Africa,  Boys In The Band will be performing the following Australian concert dates for 2013:

Tickets are available directly from the venue websites.

SMA will be providing all the main feature entertainment for Gladstone Jazz n Shiraz, on 31st March 2013!

This means that both ‘Boys in the Band’ and ‘The Rat Pack’s Back’ will be performing their concert shows with opening sets from ‘Miss Mandy Swings’. Our fabulous band ‘Oz Horns’ will be providing their sensational tight rhythms backing all three of our wonderful acts.

The Gladstone Marina Main Stage comes to life from 6:30pm with our high calibre, toe tapping, hip swinging, fun filled entertainment for an evening of Jazz’n Shiraz brought to you by Queensland Alumina Ltd.!

For more information and to purchase tickets visit www.gladstonefestival.com

‘Boys In The Band’ SOLD OUT SHOW

‘Boys In The Band’ Valentine’s Day Concert at The Cube Convention & Entertainment Centre in Campbelltown, has now SOLD OUT!

For those of you lucky enough to be holding a ticket, get ready for a night of great music and dancing with your loved one! 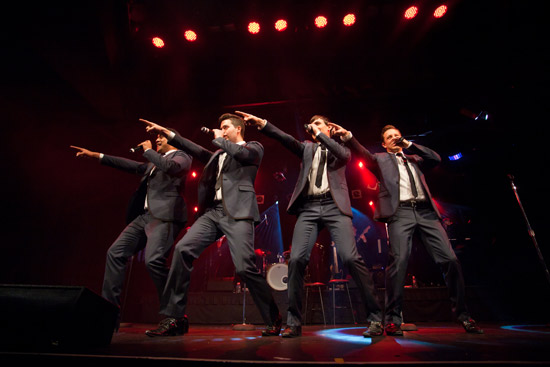 The Esplanade, Balmoral Beach Friday 19th October, 6:30 pm-8:30pm
‘Boys In The Band’ are appearing on stage at Balmoral as part of Mosman council’s ‘Out & About’ Concert series. This family friendly concert is FREE entry, just bring a picnic and enjoy a fabulous start to the weekend! For more information head to http://www.mosman.nsw.gov.au/events/3510/balmoral-concert-series-boys-in-the-band

The Rat Pack’s Back at Twilight Concert Series 2012

Wahroonga Park, Saturday 20th October, 5-8pm
The Rat Pack is most certainly Back at the popular Kuringai Twilight Concert in the Park Series. Accompanied by the High Rollers Big Band and also featuring Monica Trapaga & The Batchelor Pad the summer’s evening will be full of top quality live entertainment for everyone.
The concert is a FREE event with fun for the whole family.

Concert Dates Announced for Boys In The Band

Boys in the Band have become so popular that everyone wants a chance to see them…and now you can!

Boys in The Band will be bringing their spectacular concert experience to a premier live venue near you with upcoming dates at The Juniors Auditorium, Kingsford.
Follow the links below to purchase tickets to these events. 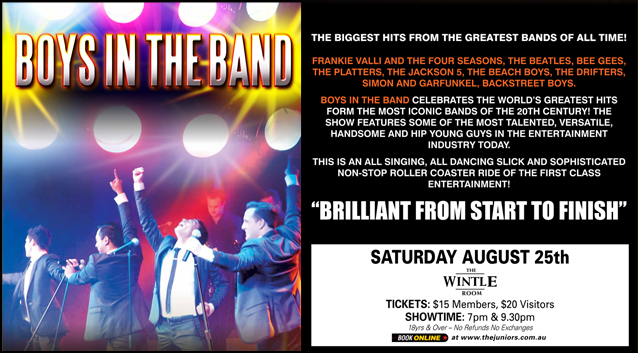 The Royal Hospital for Women foundation’s massive picnic, held at the Entertainment Quarter Moore Park in Sydney has confirmed Boys in the Band to be their headliner act. Say thanks to your mum, pack a picnic and don’t forget your dancing shoes! 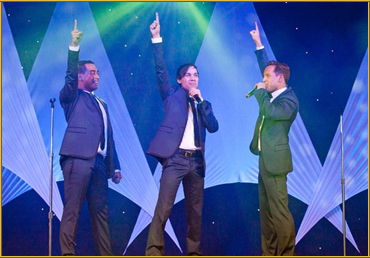 Fiesta is the City of South Perth’s annual community celebration, offering two weeks of special events and activities for all to enjoy. ‘Leading Men of Music’ Theatre starring David Malek, Dale Burridge and Brydon Stace will perform a selection of Music Theatre anthems in act one then return as those larrikins of Swing in ‘The Rat Pack’s Back’. Backed by the Greg Shultz big band this will be a night to remember!

Sydney’s leading leagues club welcomes back the Rat Pack’s Back for 2 shows on the 26th November. Backed by the High Rollers Swing Band and dressed to the nines, the Rat Pack’s Back will swing and sing their way through some of Frank, Dean and Sammy’s biggest hits.

The School of Arts in Burrawang, situated in the stunning Southern Highlands of NSW is renowned for presenting intimate concert nights with many of Australia’s leading artists.
Don’t miss out as tickets are limited. 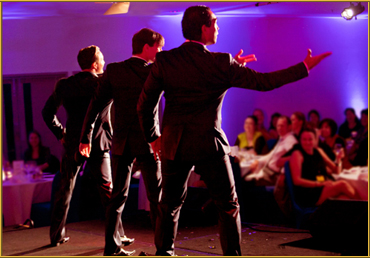 Boys in the Band prepare to perform at Twilight – 29th October 2011!

Boys in the Band are quickly establishing themselves as not only the hottest corporate act in town, but now with a full concert show they are a force to be reckoned with! Their next concert date is for the Twilight Series for Ku-ring-Gai Council on the 29th October 2011.

It’s a free concert so pack a picnic and rock on down!