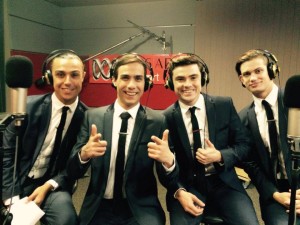 Boys in the Band have now wrapped up all the Victorian tour dates of their 2015 Australian tour. The cast were thrilled to play some iconic and beautiful venues during April including Her Majesty’s Ballarat, The Drum Dandenong, Geelong Performing Arts Centre, The Capital Theatre Bendigo and Lighthouse Theatre Warnambool.
With some great crowds and The Players band expertly backing their every move it’s safe to say that the boys have had a blast entertaining the Victorian crowds and can’t wait to return next year. Boys in the Band will hit Queensland venues for the first time during May followed by NSW later in the year.