Boys in the Band, Concerts, News, The Players, Tours 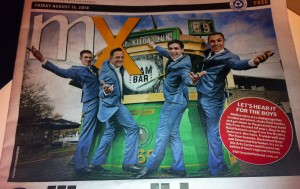 Boys in the Band are now officially half-way through their exciting Australian Tour and this weekend took over Melbourne where they not only hit the front cover of mX magazine but performed four hugely successful concerts at Capital Theatre, Bendigo and the prestigious Arts Centre Melbourne.

SMA band The Players have been on the road with the boys providing all the grooves and beats to make the hits of the last 50years really sing, while the boys have never been in better form receiving standing ovations at every single show.

The rave reviews are flooding in and SMA are very excited to see where Boys in the Band will conquer next with big plans for 2015.

This week Boys in the Band tour regional Victoria with shows in Warragul, Sale and Yarram, before returning home to sing the national anthem and perform a song from their show at ANZ Stadium’s Souths v Canterbury NRL game on Thursday 28th August. The final show of the tour will be held at The Juniors Kingsford on Saturday 30th August.