Boys in the Band, News, The Players 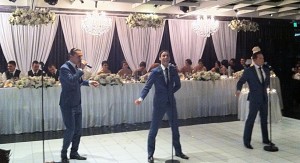 Wedding season is well and truly upon us, and our fantastic band The Players are in full swing making big days magical and keeping dance floors everywhere filled to the brim.

The Players and Boys In The Band were thrilled to be a part of Michael and Rosa’s celebrations at Doltone House on the weekend where they added the wow factor entertaining 650 guests in grand fashion.

Boys In The Band were a huge hit with the crowd performing an extended 40minute show tailored specifically for the bride and backed live by The Players 4 piece band. The bridal party were up and out of their seats dancing away with the boys, as were their guests.

With the crowd well and truly warmed up it was time for The Players to hit the floor and for guests to party the night away. The band performed tunes from  Stevie Wonder and Earth Wind and Fire, right up to Beyonce and Bruno Mars, and were a winner with the packed dance floor.