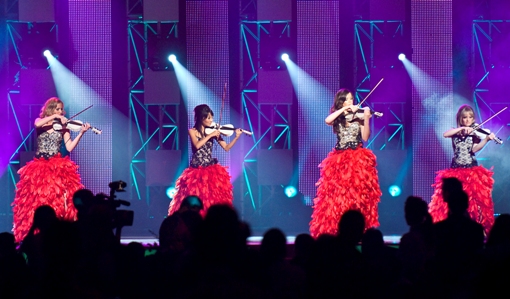 String Diva delivered not one, but two, spectacular performances at the Sydney Convention Centre for the Official Conference Gala Dinner of the World Conference on Lung Cancer. With over 2,000 guests the dinner was a grand Australiana affair that took guests on a journey throughout our beautiful country.

Taking the stage for a 15minute western inspired Australian medley, the girls were decked out in cowboy hats and performed against a magnificent 32m long projection of the WA Bulgarra Cattle Station.

The girls later returned for a grand finale complete with spectacular live pyrotechnics in front of the stage and a video of the Sydney Harbour New Year’s Eve fireworks behind them. A huge hit, the girls left the rest of the evening to SMA band ‘The Players’ who partied with guests until the end of the night.

SMA Productions are proud to have managed the entire Gala Dinner event along with the other gala events on the WCLC four day calendar.