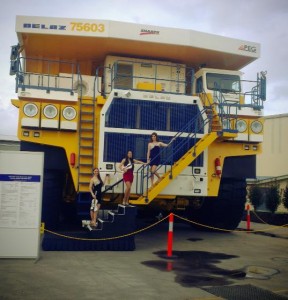 String Diva put on a spectacular performance for the launch of two monster vehicles to be used in the Australian mining industry. Seated in the front row was none other than former Prime Minister, John Howard, who enjoyed the girls’ performance and later went on to speak at the event. The star attractions were the 400 tonne and 262 tonne Belaz trucks that arrived straight off the boat from the Las Vegas Mining Expo, which formed the stage for two spectacular String Diva sets.